Using LinkedIn for Sales Isn't Hard... Unless You Do This 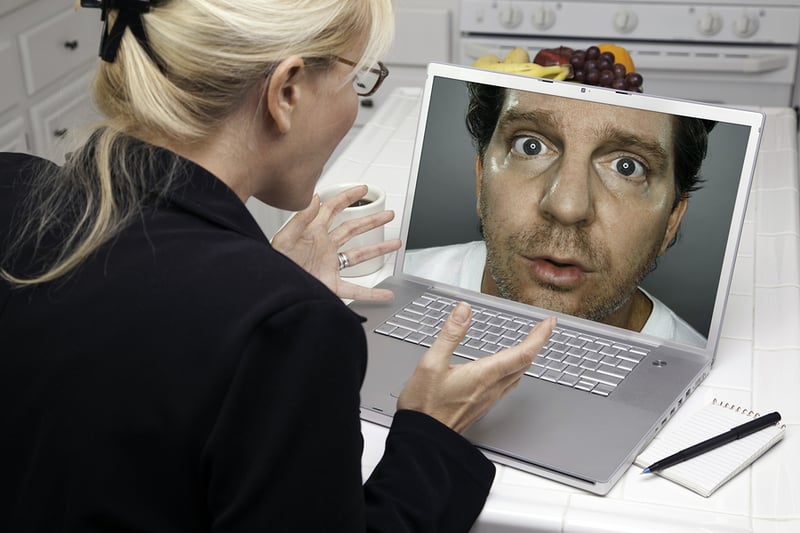 Are your sales people making potential customers angry with their (or YOUR) social media cluelessness?

I personally don't think selling on LinkedIn is a terribly difficult task for those willing to put the time in necessary to make it effective. I guess it depends on what you expect to get out of the time you spend there, and as your company's sales leader, this is an important distinction to make.

I was already thinking about the different ways people are using LinkedIn for sales, when I received the most obnoxious cold email immediately after accepting a new LinkedIn connection.

Feeling a little snarkier than usual, I fired back a response, and I haven't stopped laughing about it. Though, I would like to share it with you, because your sales teams are probably making this exact same mistake (or perhaps you are with the agendas you impose), and as the person responsible for their outcomes, this lands squarely on you.

We've all been there... We connect with somebody on LinkedIn, and almost immediately, we regret it, because they LOOK like they're only interested in selling us something... Then five minutes or a day or three days later, the pitch comes a flyin'

(Use this phone number to shake off pushy cold callers)

You know which look I'm talking about? Usually the person is overly attractive and/or optimistic-looking. Their profile usually mentions something about helping businesses do something fantastic. (as I write this, I'm going back and editing my own to make sure I don't come off this way, haha).

When I was in sales, time invested in LinkedIn was ALL about the Benjamins, or at least, that's what I was told it was supposed to be about. However, that whole, "cold-calling, my-time-is-more-valuable-than-yours" mentality never really sat well with me, and I never put the relationship I had with my employer over that of my network. NEVER. EVER.

Jobs come and go, and there is no such thing as "permanent employment," however, I am permanently ME, which means that my reputation would always be there. My network happens to like doing business with me because they don't see me pressuring them into things that don't make sense. 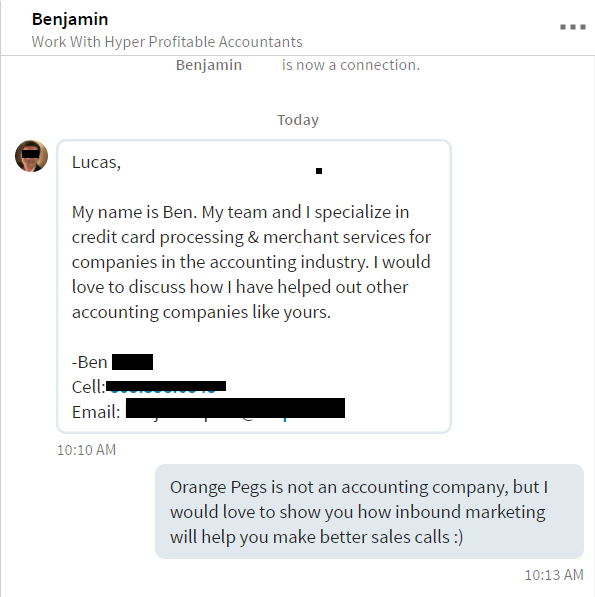 There is only one move this person made that I would consider to be good. He connected with me, and I accepted his invitation. From that point forward it was a complete and utter disaster. He could have found a good use of our network relationship, but chose to spam me instead.

By the way, I accepted it, because although he seemed salesy-ish, I personally thought there would be an opportunity for us to help them. But even if I didn't see an opportunity, I still give people a chance as long as they aren't overtly salesy in their profile. For example, I don't accept invitations from supermodels with no endorsements, but holding executive roles straight out of college.

This guy was a step above that.

I suppose that's up to you to answer. Why would somebody ignore the opportunity to actually view my profile and publicly available information? What motivation do YOU think got us here?

This guy found me on his own as far as I can tell. The company he works for seems legit. And, actually, they could probably benefit from a relationship with me, since I am so well connected in the accounting industry. I saw it as a two-way street, since they may need help with marketing (which is becoming painfully obvious that they do).

Either way, he didn't take the time to get to know me by simply reading my profile. In there he would have even seen recommendations from CPA firms he wants to do business with, but he blew it.... absolutely BLEW IT.

4. What could he have done differently?

The last one is very likely not HIS fault. With most of the companies I worked for in the sales capacity, I was personally responsible for generating my own leads. Sure, I would get lead lists, but they were all just the same gobbeldy gook garbage every single one of our competitors were working off of, and they wouldn't make for very effective calls.

I'm sure your lists make your salespeople feel quite similar... just a hunch.

See, inbound saves you the guess-work, by providing leads who give you permission to market and sell to them, and a complete history of their time and interaction with your company online.

The reality is that if you're not generating inbound leads, you're putting the onus of the entire sale on the head of somebody who doesn't put your company first, and who may or may not still be employed by you in 6 months.

That kind of investment is probably costing a lot more than you realize.

But an investment in inbound is one that sticks with your company indefinitely. There is no quitting or getting fired. It doesn't what it's supposed to do, or it evolves.

How to Protect Intellectual Property When Engaging a Marketing Vendor

Why is "thought leadership" so important to you? I have asked a lot of people this question over the years, and I'm curious to ...
Start Reading