3 SEO Techniques that Could Be Killing Your Website Traffic 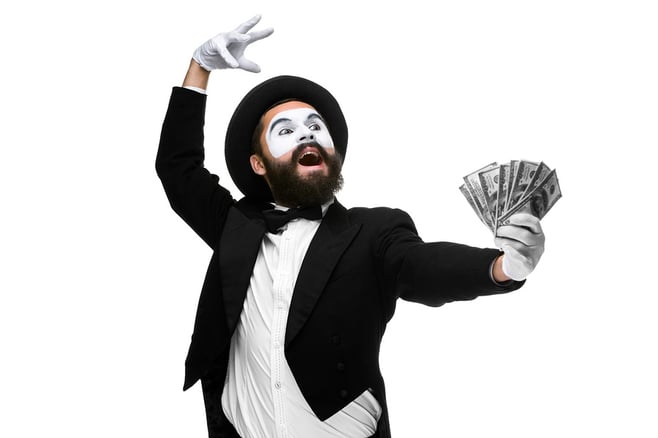 Is your SEO strategy helping your underlying objectives of increasing sales, or is it just a bunch of tricks meant not to deceive Google, but.... you?

Nothing worthwhile ever comes easy - or quickly. At least, that's what my parents tried to teach me growing up - not that it stopped me from investing in get-rich-quick schemes along my way to and through adulthood. But, eventually, I learned that if something sounds too good to be true, that's because it is... a lesson that has YET to be proven wrong in my world.

If you're trying to determine whether the last 12 months' marketing investment in SEO is paying off or you are considering engaging with an SEO agency today (who happens to be saying a lot of the right things, but somehow seems off to you), there are THREE important tactics you need to be sure to stay away from.

The Top 3 SEO Techniques to Avoid:

Most of the marketing leaders I speak to are aware of SEO, and have made investments in this area in the past. But a lot has changed over the last 10 years, and if you've been in the game for even half of that time, you've likely seen hot trends that once put businesses on the map, now coming back and absolutely DEMOLISHING their online success.

Why is this happening?

Well, it's really quite simple - The internet, as we know it, has only been around for a little over 2 decades, and it has gone through a series of evolution. In other words - it's maturing. It wasn't until I was in MY 20s (late 20s, at that) before I understand my place in this world.

Google's mission from the very first day was to provide search results that matched the users' inquiries. They knew that if their results were relevant and helpful, you would use them more than the other guys.

Think back to the days of Lycos and Hotbot. Search results were never really quite right. If you're 40 or older, this should resonate with you. I remember being SO frustrated with the internet in its early days because of how easy it was to click on pointless links or those that would install viruses or other forms of malware. I remember getting caught in directory loops that would go on for days, and never end up on something helpful.

On one hand, there weren't NEARLY as many sites published (300,000 in 1996 vs the BILLION we have today: SOURCE), so it just wasn't realistic to expect any of the search engines to get you to your desired destination on the first try. But it wasn't just the volume of information available, the engines themselves were unsophisticated, and were actually directories vs web crawlers, so the requirements for getting found were very different.

Keywords were EVERYTHING back then.

The result? Programmers everywhere were able to "hack" their sites into the first page. Thus began the golden age of "black-hat" or "ninja" SEO.

But Google came out on the attack in 1996 when they first launched, because their commitments were to the user, and they figured out how to measure a website's TRUE intentions by analyzing back-links (other websites linking to yours).

Of course, that hasn't stopped hackers from doing their thing, and for the first 15 or 16 years it looked like Google was never going to completely solve the hacker problem - at least, that's how it looked to us, the consumers.

But something changed between 2011 and 2012, didn't it? Turns out, Google rolled out several major algorithm updates that directly attacked the black-hat SEO techniques that defined their golden era. In particular, that's when you'll find PANDA and PENGUIN, and several updates of both.

This is when the tides changed. Click HERE for a full time-line of algorithm updates.

This is in direct response to Google's original algorithm, which measured inbound links from other websites, and wrapped them up in their rankings.

Simply put, link farms are a series of fake domains or directories, developed and implemented for the sole purpose of influencing of linking to your website... all to fool Google into thinking others

But after billions of dollars invested in the quality of their engine, Google put out an update that recognized link farms, and took a very aggressive stance against those who would abuse this particular mechanism.

When identified, you were subject to major penalties, and you could lose more than 90% of the traffic coming your way in an instant. In fact, MANY companies did! Maybe even yours.

A bad link didn't automatically mean you lost favor, but it did create flags, and with enough of those and over time without resolution, it knocked out some of the biggest, most visited sites on the internet right off their pedestals.

It's not a very common practice anymore, although, there are some "ninjas" out there who refuse to play by the rules still repackaging and pitching it as revolutionary. Because of this, and because of those hacker ninja SEO companies then turning around and charging former clients to REMOVE the links once the penalties are imposed, Google has actually reformulated this to devalue bad inbound links vs penalize you for them.

That may sound a lot better, but in the end, if those fake links were the REASON why you had 90% of your traffic, devaluing them will essentially have the same impact as a penalty, the only difference being that getting out from under it is more of a growth game vs damage control.

Where this is actually helpful are for businesses who are maliciously attacked by competitors engaging these hackers to connect those link farms to YOUR site... or worse, just going around and using it to extort perfectly compliant webmasters.

The key to knowing whether the SEO agency you are interviewing practices white or black-hat strategy is asking them how exactly they go about improving your SEO.

It's not a trick question, and there is no reason why they shouldn't share it with you, unless they are doing something Google doesn't want to see.

Learn more about our SEO services.

Everybody talks about keywords and meta-tagging as if they were the end-all be-all when it comes to quality SEO. At one point, 20 years ago, it was.

They are still important today, so don't downplay their significance. However, the words by themselves (without context) are meaningless. Google has even publicly declared (which has been supported by folks like Rand Fishkin of MOZ) that they don't want you focusing on keywords.

In fact, they BLOCK 99% of the keywords that people use to find your website when you look at your analytics software.

Again, they simply don't want you focusing on them, because in the past, programmers would saturate websites with hidden keywords so that only the crawlers could pick them up. But when you opened the page, you would never be able to find them, or they'd be slammed into a footer with a bunch of other out-of-context keywords.

It's a waste of time and energy today, and Google is too smart for this trick that worked 10 years ago.

Keep in mind that real SEO takes time. Anything that creates parabolic spikes in activity is likely to have an equally turbulent fall at some point or another. Steady growth, on the other hand, leads to sustainable and predictable growth.

Google has publicly declared that they liked websites that grow. They also used to place a great deal of emphasis on keywords found in URLs and other meta-tagging. All of these things still matter, but the content itself must be geared for the user and provide a quality experience.

Why? Because Google is measuring each users' experiences, which comes from clicks, amount of time they spend on a particular page, and what specifically they look at next.

Thin content doesn't typically give users what they want, and it's seen as lazy, and a clear attempt to side-step this quality mechanism.

Thin content is when your page has less than 300 words. 300 is not a lot, so it isn't a very challenging requirement if the blog you are posting or page you are publishing has a purpose beyond SEO and traffic.

But for those who are trying to trick the search engines, getting over the 300 mark can get quite cumbersome, and if they DO end up meeting those thresholds, they're likely committing other sins, such as creating duplicate content, or providing no actual value.

Value is important. Value is what gets people to buy.

SEO comes in a lot of shapes and forms. At the end of the day though, why are you interested in SEO? Why is more traffic to your company's website important?

This is where it can get a bit tricky for some, because without a plan to convert, nurture, and close them, visitors only look great on paper... and only as long as the bill for those SEO services isn't present.

Interested in learning how to incorporate SEO into your bigger picture marketing strategy? Check out this guide to getting started with inbound. It shows how to improve SEO rankings along with how to turn traffic into paying customers:

Developing a Website on the Hubspot COS - Easy as Pi

THROW BACK THURSDAY - pre-website launch This Thursday we are celebrating our inbound marketing emergence. This blog was ...
Start Reading
Lucas Hamon Dec 11, 2015 4:30:00 AM 6 min read

Are you like so many other business owners, suffering from SEO tunnel vision? It's a common ailment, something I run into on ...
Start Reading
Lucas Hamon Dec 15, 2015 8:30:00 AM 5 min read

What do sales goals have to do with inbound marketing software anyway? Everything, actually... I was recently asked to answer a ...
Start Reading